“Play is the highest form of research.” – Albert Einstein

It’s 4:00. My children have been at school all day. As they walk down our driveway, their legs are heavy. I wonder if they will even make it inside. They toss their backpacks on the floor, tear their shoes off, and run into our playroom. I am shocked. While my annoyance that they didn’t put their backpacks on the hook and now their stinky shoes are thrown in four different directions, my curiosity causes me to pause. I watch. Both my sons, do not want to eat, they do not want to watch shows, they wanted to play.

Children are Ravenous for Play

Some version of this scene happens every day. When Landon, my oldest, started first grade, I thought for sure he would be coming home ravenous for food. Instead, he is ravenous to create. As a result, our battles have not been who gets to choose the show on Netflix’s, but who gets to use the translucent blue crystal for their Lego creation.

Most afternoons, if you were to walk in my house you will see the couch cushions are pulled off to build a fort, wooden track set up in elaborate designs, or Legos sprawled across the floor.

Today, Magformers caught the boy’s attention. As soon as they were home, they were building shaping and reshaping creations made from plastic covered magnets. The possibilities are endless as the pieces are shaped in triangles, squares, rectangles, and pentagons. There is something soothing about the push and tug and click on the pieces snapping together.

A few hours later, I was making dinner. We had decided that we were going to have breakfast for dinner. My second child, Ayden, loves to cook and pancakes happen to be one of his favorites. He loves to measure, and stir, and take licks of batter when he gets the chance.

As we were placing the mixture onto the griddled to bake, in comes a robot rolling across the kitchen floor. Using the magformer motor vehicle set, Landon constructed his own design. Located in the middle of his invention was a plastic Tupperware container. Landon had been building and rebuilding this concept for hours. He had wanted to build a car that would move from one room to the other to serve us our dinner. So, of course, pancakes fit perfectly. 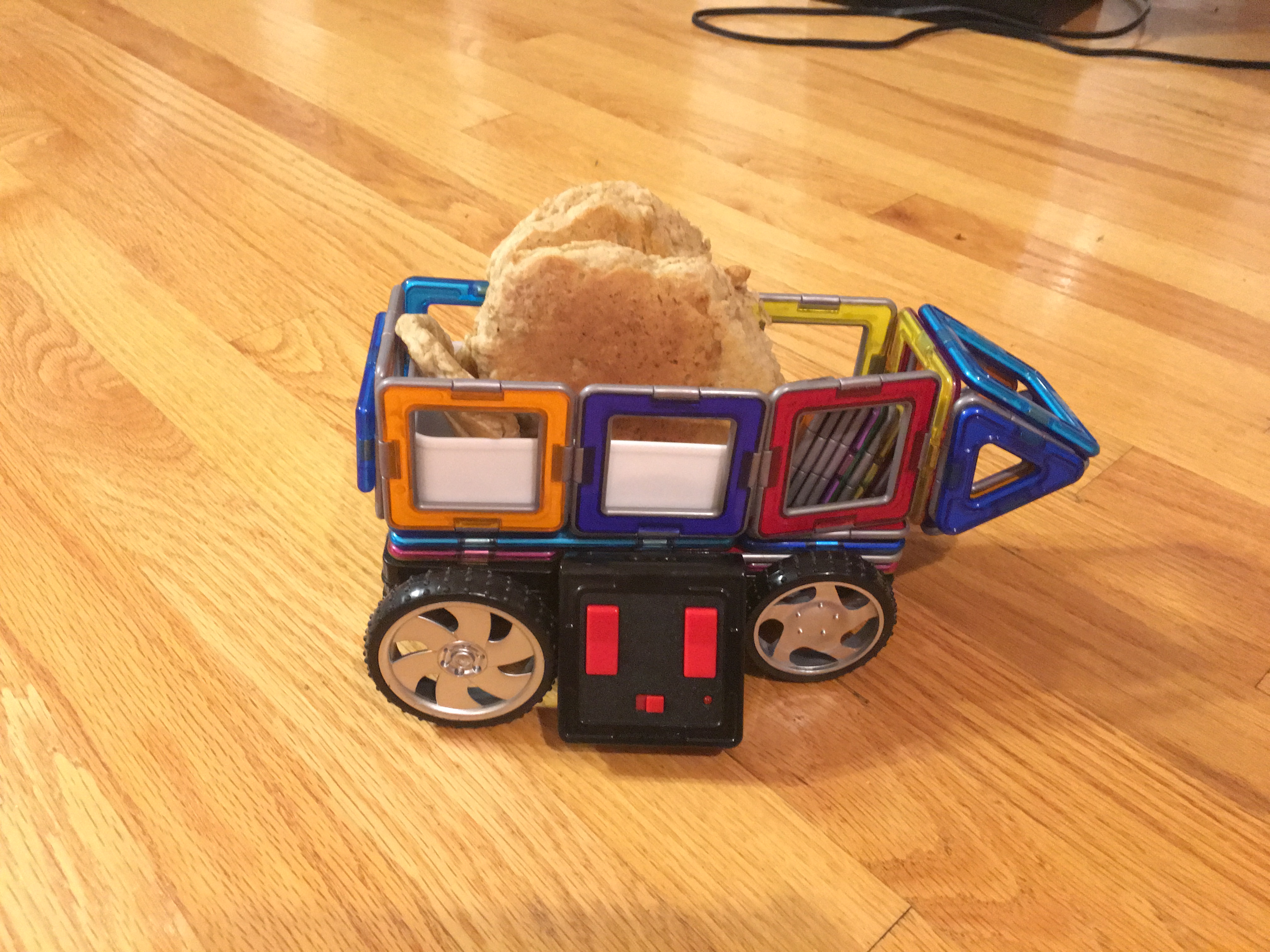 Later that night Landon told me that he had been thinking about this idea in his head for a while. Through spontaneous play, he made sense of ideas that were unformed in his mind. He made this robot simply out his own pleasure and imagination.

This invention wasn’t anything out of the ordinary. Both boys make creations like this one all the time. Most children, when given the opportunity to play, will come up with their own unique creations.

There is massive amount of reseach to back up the vital role play has in our lives. According to researcher and psychologist, Steuart Brown, the importance of play in our lives for both child and adult cannot be over stated. Brown wrote a book called “Play: How it shapes the brain, opens the imagination and invigorates the Soul.” In this book, he states, “The truth is that play seems to be one of the most advanced methods nature has invented to allow a complex brain to create itself.” The book is filled with references of substantial amount of research that backs up the vital role play has in our children’s lives as well as our own.

Additionally, Carol Jung, a world-renowned Swiss psychiatrist and psychoanalyst stated, “the creating of something new is not accomplished by the intellect but by the play instinct.” If this concept is true – innovation is not based on intellect, but play. In a culture that honors and recognizes intellect, this is a breath of fresh air. Anybody, regardless of intellect, can become an inventor.

All things considered, giving time for our children to have play isn’t a new concept. However, it is a concept that I think we disvalue. I don’t think we do  on purpose. Is the concept too simple; too easy? In fact, as a parent, I have to push against cultural pressures to that hinder play.

As a result this extensive research, and my own reflection on the beautiful impact that I see play have on my children, I created 6 goals for myself.

6 Goals I am walking alway with:

1. Acknowledge how vital play is in our lives. In fact, letting my children play might be the most important activity that I ever let them do.

2. In the midst of long school days, I will allow space for my children to have time for play.

3. I will let my home be messy for the sake of play. Having legos everywhere and my entire living room turned into cushion covered castles isn’t easy. But the value of play is more important than my house looking perfect.

4. I will avoid over-programming my children. The pressure to put my children in endless amounts of activities is intense. I want my children to be involved, but not at the sake of all unstructured time.

5. I will make play a priority for myself. Play is not for children alone, but for me too. Brown stated that the opposite of depression is playing. Therefore, incorporating play in my own life will help fight depression and bring joy.

6. I will continue to observe the impact of play. I believe becoming more aware of the impact of play, will help me continue to make it a priority in my life and my children’s lives. For example, the night that Landon made the Robot Dinner Server, he a lot of homework. I felt the tug to pull him alway from playing to get his worksheets done. Then, it dawned on me, letting him express himself in creativity, is the best possible way for him to learn. Homework will get done, but in this moment, play is better.

As a way of encouraging play, we started Hyder Homeschool. The concept is not a traditional homeschooling as the name might suggest. However, the idea holds that parents have an active role in their children’s education even when they go to school full time. The concept was born from a desperate need to get my kids off a scene. As a result, Hyder Builder Kids was formed as a place for my kids to express their invocation and creativity.

I still have a lot of questions regarding this topic. However, I want to open up the discussion. When you take time to reflect on the importance of play in your life and your children, how does it impact you? Does it cause to make any adjustments in your lives? How do we fight the cultural tug that pulls us away from free play?

2 Replies to “Play’s Magical Role in Innovation and Creativity”